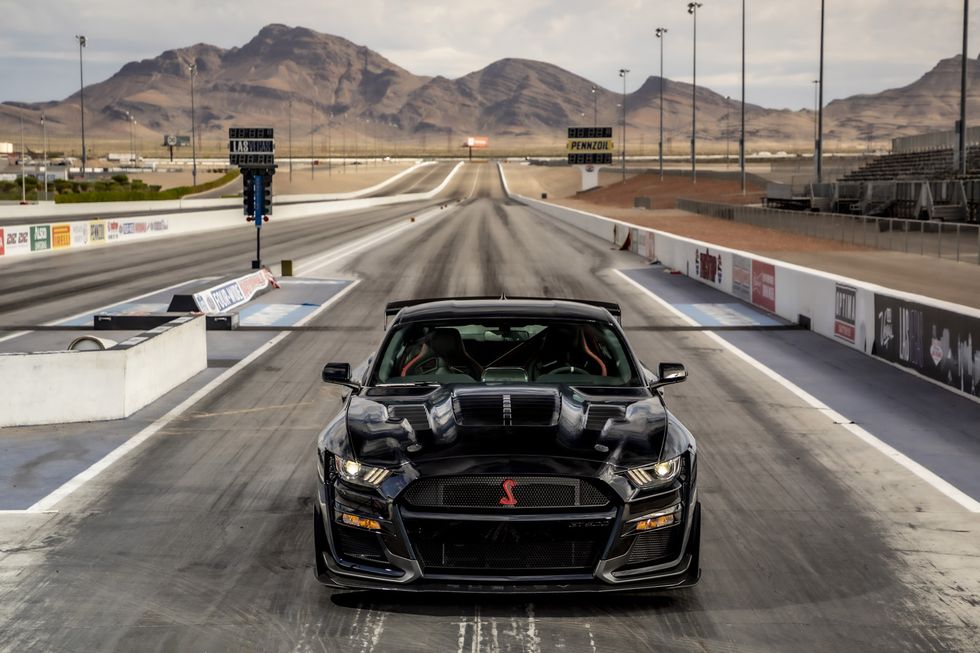 shelby american unveiled the gt500 code red at the woodward dream cruise in detroit this past weekend. the limited-production model is based on the current-generation mustang gt500, but sthelby pulled the supercharger off the 5.2-liter v8- and replaced it with a pair of turbochargers.

the engine was re-engineered by nelson's racing engines and fitted with a dual-feed fuel system, allowing blends of racing fuel when needed. engine cooling capacity was increased to handle the extra heat. when driving the code red using 93-octane gas from the pump, it will produce over 1000 horsepower and 780 pound-feet of torque. when using e85, the code red's will make as much as 1300 horsepower with torque moving up over 1000 pound-feet.

shelby american was up front about the performance of the code red, saying: "while not street legal, it's very capable at moderate speeds in most any curve. but when the turbos spool up, the car is best enjoyed moving straight ahead." further modifications include a stronger transmission to hold the increased power, a one-piece driveshaft, shelby/baer brakes and rotors, and 20-inch wheels in front with pirelli p zero tires and nitto ny555r drag radials in back.

on top of the numerous performance upgrades, the code red will have a widebody kit for bigger tires, a new interior, new badging, and a carbon-fiber hood. shelby will take up to 10 gt500s from 2020, 2021, and 2022, with production capped at 30 total. if you are interested in owning one of the 30, be prepared to spend. the package starts at $209,995 which does not include the over $80,000 price tag of the donor car.