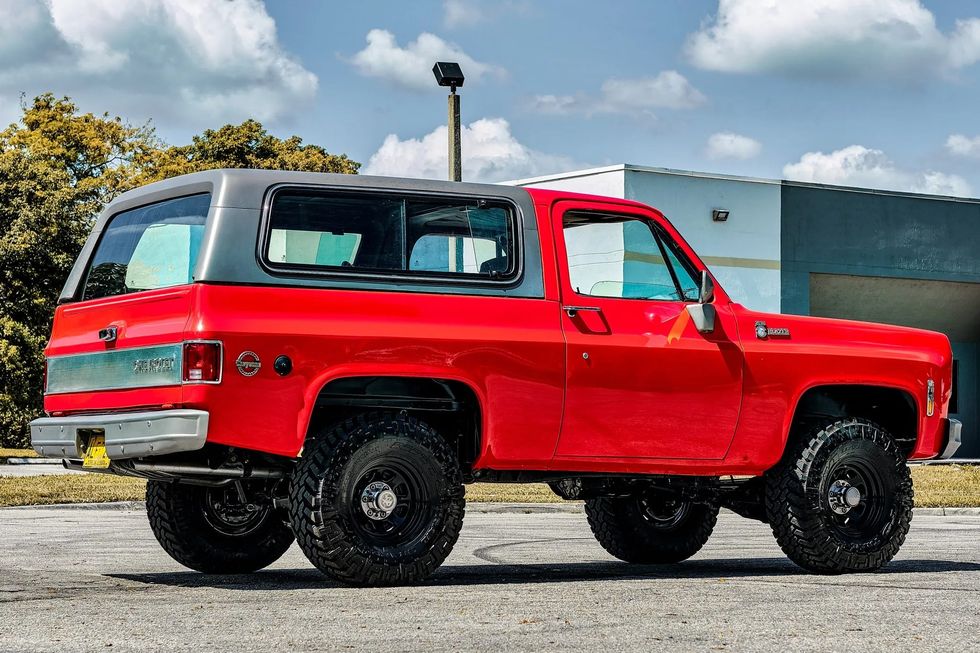 • this second-generation k5 blazer was a wildly capable alternative to the ford bronco and dodge ramcharger of the 1970s and '80s.

• this k5 blazer has been recently restored with new bits and pieces ranging from fresh door seals to a completely new 350-cubic-inch v-8 engine.

something circulating in my blood makes me attracted to old-school heavy chevys. maybe it's a natural reaction to the typical blue fog of pushrod perfume that follows most small-block v-8s. it could also be getting things muddy is the nucleus of my love for four-wheel-drive things. either way, it's tough to look away from this florida-owned 1978 chevrolet k5 blazer cheyenne that's currently up for auction on bring a trailer—which, like car and driver, is part of hearst autos.

this example was originally purchased in miami before it eventually ended up in colombia and then later returned stateside where it underwent some serious restoration. everything that's been rotting since the 1970s has been renewed: brakes, power steering, exhaust, instrument cluster, door seals, window felts, and even a replacement carbureted 350-cubic-inch v-8. its three-speed automatic transmission and dual-range transfer case are reported to be in working order. the steel frame has been blasted and repainted in gloss black, and the hubs have been fitted with black 15-inch steel wheels wrapped in 33-inch nitto trail grappler mud-terrain tires.

more impressively, the restoration process hasn't gone too far. this k5 blazer appears to be using oe-style glass three-prong sealed-beam headlights up front and drum brakes at the rear. it's free of obnoxious aftermarket fender flares or a dorky roof-mounted led light bar. the most modern piece of tech is a retrosound stereo intended to mimic the chrome-knobbed style of the k5 blazer's original radio.

this specific example isn't showroom perfect and is kept alive thanks to fresh paint, new floor panels, and a little welding. that makes it a great candidate for a buy-to-drive, rather than a win and park.

it's easy to imagine bouncing down a forest trail road en route to an area that's wi-fi- and ad-free. even car and driver's own legendary david e. davis, jr. called the k5 blazer a "steel and fiberglass paul bunyan" back in 1979. today, a k5 is now the nomenclature given to kia's family sedan, and the current blazer is more paul mitchell than ax wielder.

bidding is currently at $8500 with four days left in the auction. the k5 blazer david e. drove had similar options including an electric tailgate window, a rear roll bar, and a $39 "heavy-duty freedom battery," for $10,478.70. adjusted for inflation, that's slightly more than $42,000, or roughly the price of a four-door ford bronco outer banks. last year a similar k5 blazer sold for $61,111 on bring a trailer but was in arguably better condition with the larger v-8 engine. there was also a 1976 k5 blazer cheyenne painted in beautiful grecian bronze and white two-tone that sold for $67,000 in january.

bidding on this one ends on friday, july 15.