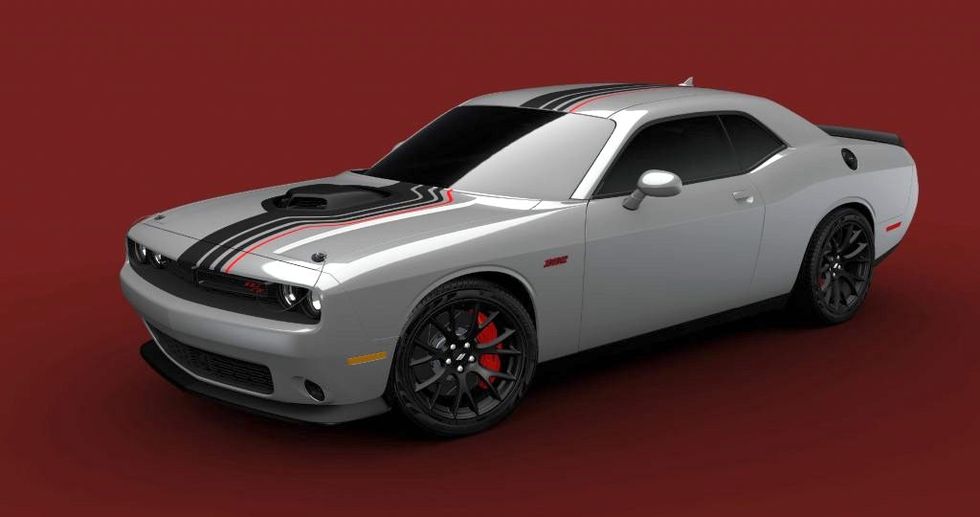 by now, you've probably heard that dodge will say goodbye to the current-generation challenger and charger after the 2023 model year. the automaker also announced that it will say sayonara to its beloved muscle cars with a series of seven "last call" special editions, the first of which will be the 2023 dodge challenger shakedown.

the new challenger shakedown is inspired by the concept car of the same name that appeared at the 2016 sema show. while the concept was a 1971 challenger retrofitted with parts from a then-new 2017 model, the 2023 shakedown mainly cribs its exterior and interior styling bits. the latter includes a set of stripes that run the entire length of the car, with three black lines of different widths and a single red line. all examples also have red "392" fender badges, red brembo brake calipers, and a unique spoiler graphic.

inside, the shakedown edition features black nappa leather seats with microsuede accents and red contrast stitching. the red stitching also extends to the steering wheel and dashboard, where there's also a "shakedown" badge. the interior comes dressed with demonic red seatbelts, too.

not only does the 2023 challenger shakedown have a distinct appearance, but dodge says it only plans to build 1000 examples total. that will include 500 copies based on the challenger r/t scat pack and 500 of the r/t scat pack widebody . both variants are only sold with the 485-hp 6.4-liter v-8 and either a six-speed manual or eight-speed automatic transmission.

dodge hasn't released pricing for the 2023 challenger shakedown, but the company said that information along with specific dealership allotments will be announced when orders open later this fall. with all the options that are included with the shakedown edition, the 2022 challenger r/t scat pack starts around $52,000 and a similarly equipped widebody variant adds roughly another $10k. we'd wager the 2023 shakedowns start a few thousand dollars higher than both, so in the $55k–$65k range.