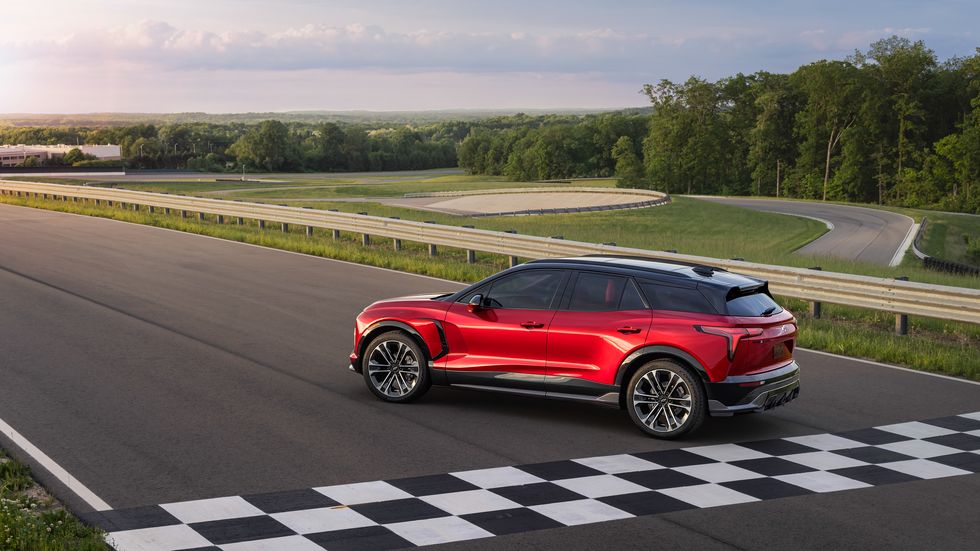 the chevrolet blazer has been a shape shifter since the nameplate first emerged in 1969. originally a full-size, truck-based two-door called the k5, the blazer migrated to a smaller suv body style based on the s-10 pickup in the mid-1980s. then came the mid-size trailblazer of the early 2000s, which spawned an ls v-8–powered ss model, before the blazer title returned on a sharply styled crossover in 2019. now chevy is repurposing the name for an all-new electric suv, which arrives for the 2024 model year with up to 320 miles of range and the resurrection of the ss badge on a 557-hp performance model.

the blazer ev debuts with four trims—1lt, 2lt, rs, and ss—and a dizzying array of powertrain choices. the 1lt, 2lt, and rs are front-wheel-drive models as standard, with the 1lt able to go an estimated 247 miles on a charge. all-wheel drive is optional on the 2lt and rs, and the 2lt maxes out at 293 miles of range depending on battery size. the rs will also be available in a rear-wheel-drive configuration, and with the right battery and drivetrain the rs will be able to travel up to 320 miles.

the blazer ev rides on general motors' ultium platform and three battery sizes will be offered, but chevy hasn't revealed how big the packs are. chevy says that when plugged into a dc fast-charger, the blazer ev will be able to charge at up to 190 kw, adding 78 miles of range in 10 minutes.

at the top of the range, the blazer ss becomes the first electric chevy to bear the super sport badge, and it pumps out 557 horsepower and 648 pound-feet of torque. all-wheel drive is standard on the ss, and chevy claims the crossover can hit 60 mph in under four seconds in the sportiest drive mode—which bears the eye-roll-inducing name wide open watts, or wow. the ss will be fitted with front brembo brakes and it, like all blazer evs, features an independent front and rear suspension. this sportiest model boasts an estimated 290-mile range.

each trim level gets a unique front fascia, with the lt displaying a blanked-off body-color grille while the rs adds a black grille piece and a full-width led light bar, along with sporty side skirts. the ss gets a more aggressive black mask with a column of strakes below the headlights and also gains a black roof. the lt rides on 19-inch wheels, while the rs upgrades to 21-inch units and the ss features 22-inchers. the led light bar found on the rs and ss, which includes an illuminated chevy logo, plays lighting sequences as the driver walks towards or away from the car, as well as displaying the charge level when the blazer is plugged in.

the centerpiece in the interior is a 17.7-inch touchscreen paired with an 11-inch digital gauge cluster. the dashboard design is sleek and futuristic with turbine-like air vents, and the rs and ss add a flat-bottom steering wheel, ambient lighting, and lots of red accents. the rs and ss also get heated and ventilated front seats, while standard heated rear seats on the ss can also be optioned on the rs. we were wowed by the crisp design in our brief seat time in a pre-production vehicle, but we found the headroom in the second row severely lacking.

chevy also says that there will be a police pursuit vehicle version of the blazer ev. using the ss as a base, the ppv will be fitted with the largest battery and will be offered in rear-wheel drive or dual-motor, all-wheel drive specifications. the ppv will also have the ss model's brembo front brakes and an interior redesigned to suit the needs of police officers.

the first blazer evs to arrive on dealer lots will be the 2lt and the rs, which go on sale next summer. the 2lt will start at $47,595 and the rs at $51,995, with the ss coming later in 2023 at an asking price of $65,995. the cheapest blazer ev, the 1lt, and the ppv will show up in the first quarter of 2024, with the 1lt starting at $44,995. the blazer ev will be produced at the same factory in ramos arizpe, mexico, where the current gasoline-powered blazer is built, and the two blazers should coexist for the foreseeable future.