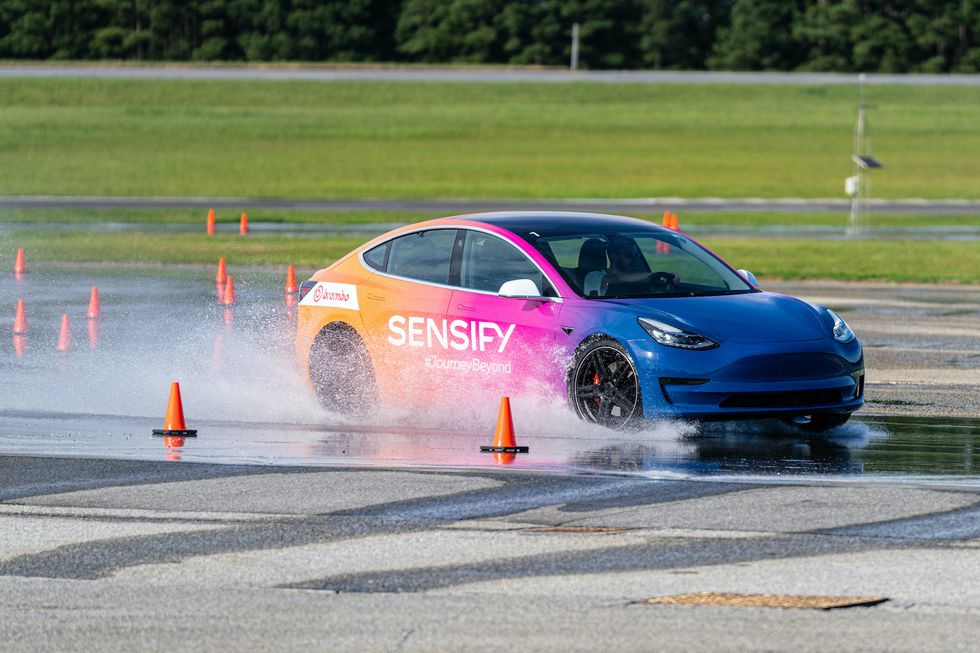 it's music to our ears to hear the tires singing a uniform, productive squeal in a straight-line stop on dry pavement, each one held very close to its slip target of 5 to 7 percent (that means the tires are rotating 5 to 7 percent slower than the vehicle's speed). this sound is similar to the wheelspin during maximum acceleration that evs can maintain due to the exacting precision of controlling an electric motor. sensify's brake-pressure perturbations are so subtle that, unlike today's anti-lock control where the pressure at each corner follows a sawtooth pattern, you can't feel them.

we tried out sensify on a tesla model 3 performance demo vehicle, driven back to back with a production model 3 performance at michelin's laurens proving ground in south carolina in a series of braking maneuvers on dry and wet pavement. even in the wet, most of the time we couldn't perceive the slight and continuous adjustments happening at each corner. brembo wouldn't yet quantify the improvement in stopping distance, other than to say it expects it to be better than current braking systems.

the demo vehicle uses two different actuation methods: in the front, each caliper has its own master cylinder, which is connected hydraulically to the fixed caliper. but that master cylinder is actuated by a small electric motor. in the rear, an electric motor—similar to that of today's ubiquitous electric parking brakes—directly squeezes each floating caliper, and there's no hydraulic connection whatsoever. in production, a vehicle could have a split system like this, or it could have either the hydraulic or electric setup at all four corners. brembo says it has yet to be able to package the electric setup with fixed calipers, however, so vehicles that want the performance and look provided by fixed calipers will need to use hydraulic fronts. but brembo is working to shrink the packaging in the future.

it's a brake-by-wire setup, where the brake pedal is pushing against a calibrated spring pack to give it a familiar feel. this is something the company has been working on for nearly a decade. in production, brembo says, there are two possible ways to implement it. there could be a front hydraulic backup circuit that's connected to the front corners in case of failure. or, with proper redundancies, such as a backup power source (i.e., two batteries), the hydraulic backup wouldn't be required. the rules automakers must follow, the federal motor vehicle safety standards (fmvss), in this emerging arena are still being hashed out. brembo says that sensify also reduces brake drag to near zero, with a redesigned spring to keep the pads away from the rotors when not in use, and that it also keeps the pads more parallel to the rotors.

packaging is potentially simplified because each unit can live in a different spot or, in the case of the electric setup, doesn't trigger the need to package hydraulic lines. separating each corner into a module could also simplify the vehicle-assembly process.

but this added complexity makes sensify more expensive than current braking systems. in a production vehicle, this new way of actuating the brakes would obviously also need to be employed in stability-control interventions or individual brake applies, but the demo car didn't have that functionality.

brembo officials said that they expect the sensify system to be in production by the end of 2024 but wouldn't specify which automakers they're collaborating with. we'll put it through our standard 70–0 and 100–0-mph braking tests as soon as we can.