DeLorean Alpha and Omega Concepts: In Beta for Now, but Promising 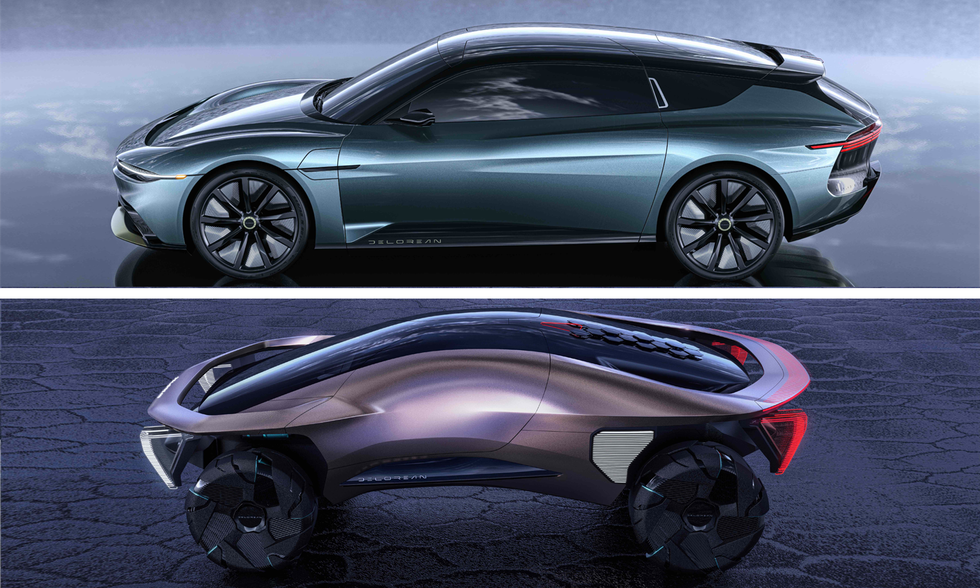 delorean motors brought a handful of new vehicles to this year’s pebble beach concours d'elegance and monterey car week. the alpha5, which was revealed earlier this year, spent some time in the bright lights thursday, while the new plasmatail and omega concepts were revealed at the delorean house on saturday evening, august 20.

the company is not revealing many details about this mini-fleet of new vehicles. the alpha5 is an electric luxury sedan complete with delorean-appropriate gullwing doors. the concept was designed in partnership with italdesign, which also worked on the iconic delorean dmc-12. we’re trying to avoid any movie references you might be expecting, but delorean isn't helping by claiming that the alpha5 was designed by looking back to the past and was influenced by a design process that created fictional concepts from an alternate-timeline company history. the alpha2 roadster was meant to represent what delorean would have made in 1996. the alpha3 luxury sedan pretends to be from 2006, and the alpha4 is a 2013-era suv with a hydrogen powertrain. delorean motors reimagined brought the three concept cars to pebble beach as well.

delorean said the 2+2 seat electric alpha5 will be able to go from zero to 60 mph in a specific 2.99 seconds and will have a projected top speed of 155 miles per hour. a 100.0-kwh battery should be good for around 300 miles in this all-wheel-drive vehicle with multi-mode adaptive suspension. delorean said the alpha5 will hit the market in 2024, with details on how to reserve one coming "soon."

it was the other concept vehicles that delorean brought to monterey that looked more towards, well, the future. the 2024 alpha5 plasmatail is an extended, wagonesque version of the alpha5. the stretched variant can fit the same number of passengers but comes with more storage space.

if the delorean concepts are about a sometimes fictional past, the new omega concept is all about the future. attempting to predict what the delorean design language will be in 2040, the omega concept vehicle blends the design freedom of an electric powertrain with an off-road-racing attitude, riding on large, chunky wheels with one giant windshield that seems to extend from grille to taillights. when seen from the top, the hourglass-shaped body looks athletic and aerodynamic. delorean said it represents a "complete departure from traditional automotive design," but we think the correct phrase is: "side windows? where we're going, we don’t need side windows."