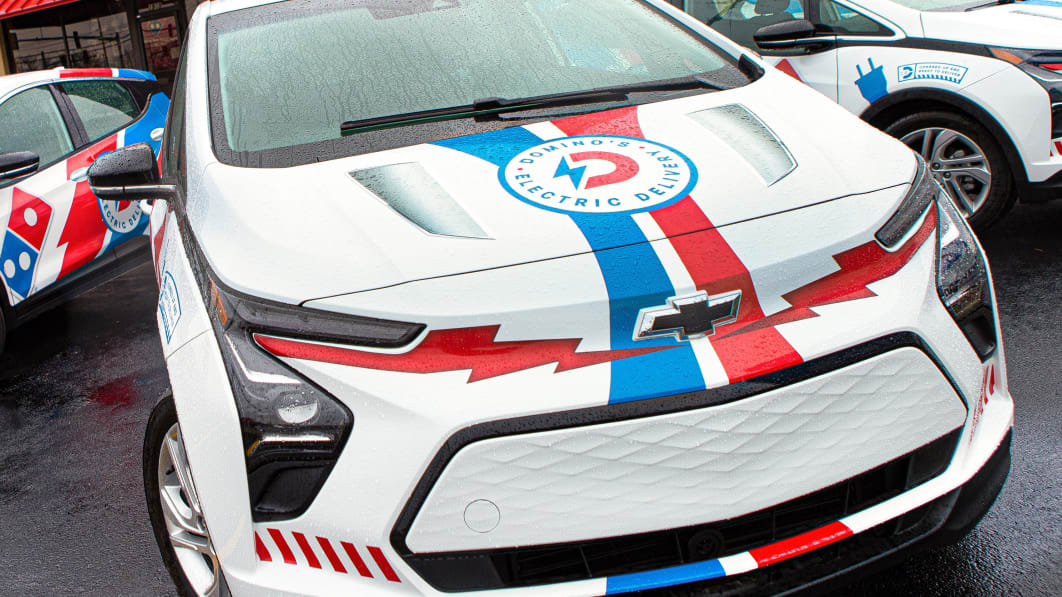 domino's domino's is rolling out electric delivery vehicles beginning in november 2022. the chevy bolt lineup will help attract delivery drivers who don't have cars of their own. the 2023 chevy bolt has a range of 259 miles, and it's "the future of domino's electrified deliveries," the chain said. domino's is investing in a fleet of 800 chevy bolts to delivery pizzas across the us. domino's   the chevrolet bolt is an electric vehicle with a 259 mile range per charge. domino's   domino's says evs provide several advantages for the chain, including avoiding high gas prices and having lower maintenance costs than traditional vehicles. domino's   they're also a way for domino's to expand the pool of potential delivery drivers to applicants who don't have a car of their own, domino's said. domino's   having more delivery drivers is key to the company's business, and a shortage of drivers caused sales to slump in 2021. chris urie source: insider the chain even offered "tips" for customers who picked up online orders to entice them to skip delivery. a worker prepares boxes at a domino's pizza restaurant in lagos, nigeria. sunday alamba source: insider all of the evs will be wrapped in custom domino's branding. domino's   "domino's has always been on the cutting edge of pizza delivery and electric delivery cars make sense as vehicle technology continues to evolve," domino's ceo russell weiner said in a press release. domino's   the pizza chain has experimented with alternative delivery methods in the past, including autonomous delivery robots. domino's pizza   domino's already uses electric bikes and scooters in 24 international markets, the company said. domino's   the first 100 ev delivery cars will roll out by the end of november. domino's   they will be making deliveries at both franchise and corporate stores across the us. domino's   domino's also created an interactive map to show where the evs are active, and where they're planned to go. domino's   michigan, where domino's is based, has 12 electric vehicles on the road as of november 21, with 93 planned by the end of 2023. domino's   "we're excited that domino's has chosen the chevrolet bolt ev to build their electric pizza delivery fleet in the us. both companies are committed to bettering our environment," vice president of gm fleet ed peper said in a statement. domino's do you have a story to share about a retail or restaurant chain? email this reporter at mmeisenzahl@businessinsider.com. read the original article on business insider