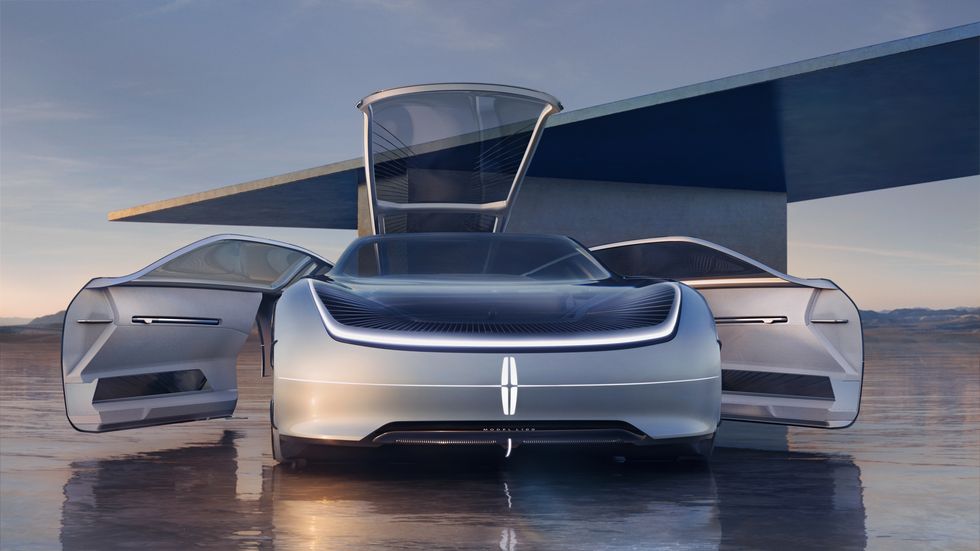 depending on who you ask, lincoln is celebrating either its 100th anniversary or its 105th. ford motor company prefers the former, as the blue oval purchased the luxury brand from henry leland in june of 1922. the latter year, however, marks the date of lincoln’s actual founding.

at its inception, lincoln strictly produced aircraft engines for the united states government. however, by september 1920, the company kicked off production of its first car: the model l. maybe this is the date to mark lincoln’s anniversary, then? in that case, this means 2022 marks the brand’s 102nd anniversary.

no matter, lincoln has declared 2022 its 100th anniversary, and the american luxury brand is gifting itself a concept car in honor of this occasion. the model l100 concept shares its ethos with the aforementioned model l.

we doubt features such as the big grand tourer’s two rearward opening doors, as well as its glass canopy roof that raises to further ease egress and ingress, have any chance of seeing the light of day. nor do we foresee its autonomous driving capability going into production anytime soon.

the model l100 concept instead presents itself as a vision of a future lincoln hopes it—and to some degree, society—will be able to achieve. there's no steering wheel or pedals. instead, those within the model l100 let the car do the driving. should the need to override the model l100’s autonomous driving arise, then passengers can use a miniature model of the car (what lincoln calls a “chess piece”) that rests on a center-console screen (the “chessboard”) to accelerate, stop, and steer the vehicle.

with driving largely removed from the equation, lincoln’s design team was able to create a cabin that caters primarily to the passenger experience. this includes a front seating space capable of switching between a typical forward-facing position or a more sociable, but also potentially more nauseating, rearward-facing position that allows front and rear passengers to face one another. a massive floorboard-mounted screen helps set the cabin ambiance, as well, with the display projecting the likes of clouds to create a more serene setting.

though the model l100’s interior caters toward a fantastical future, the exterior design is far more realistic. while we wager the open-glass frunk area—replete with a 3d-printed greyhound ornament mounted below—and massive wheel covers may serve as concept-car fancy, we think the basic design and decor of the model l100 are set to influence lincoln models in the not-so-distant future.

we hope this is the case, at least, as the aerodynamic shape, wide rear haunches, kammback rear end, and complex but understated surface treatment make for a compelling combination. it certainly helps that lincoln’s design team refrained from fitting the model l100 with an overabundance of decorative exterior pieces. instead, the model l100’s body panels are largely free of fuss. a big apple macbook-inspired lincoln badge residing on the car’s front end, not to mention another lincoln star on each front fender, reminds passersby what type of vehicle they’re looking at.

befitting its futuristic nature, lincoln designed the model l100 concept with the intention of fitting a hub-mounted electric motor at each wheel, with power to those motors coming courtesy of a solid-state battery built into the structure. although solid-state batteries do not power any electric vehicle sold today, the technology is due to power future evs within the next few years.

many of the features of the lincoln model l100 concept may not arrive for years or decades to come. nevertheless, we expect the car’s basic styling and some of its more practical fanciful features to make their way to future lincoln vehicles. who knows? maybe the model l100 will even inspire lincoln to build and sell an ultra-luxury electric vehicle, too. the brand’s done it before with the model l, after all. now may be the time for lincoln to prepare to produce such a model once again.