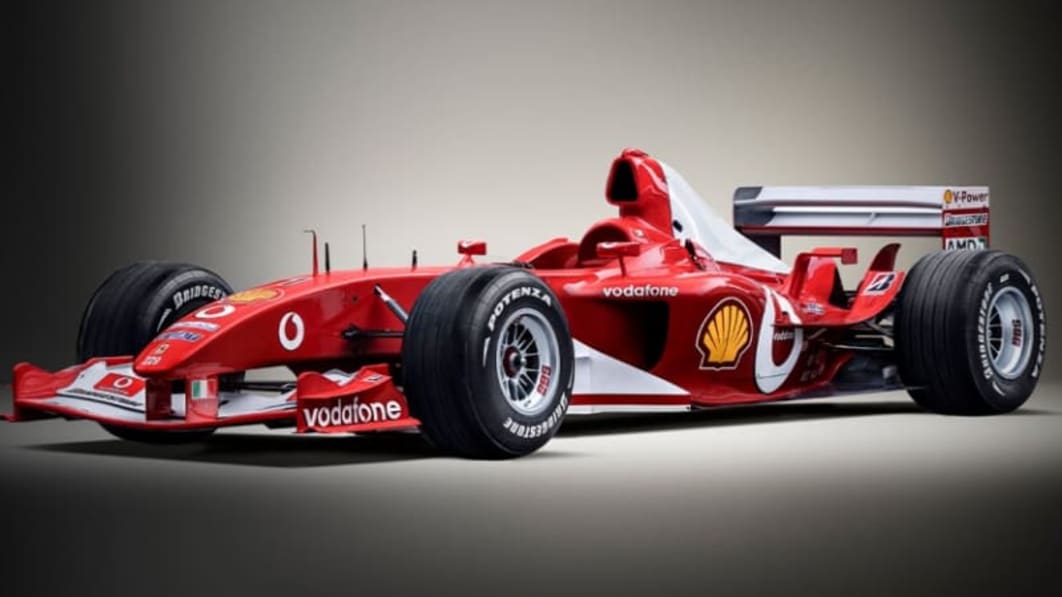 The Ferrari driven to five Grand Prix victories by Michael Schumacher during his World Championship winning 2003 F1 season will go under the hammer next week in Geneva and could fetch $9.4 million, auction house Sotheby’s said on Friday. With this racing car , designed by Rory Byrne and Ross Brawn, the German former racing driver won the Grand Prix in Spain, Austria, Canada, Italy and the United States. “This car  is one of the only four car s with more than four wins as in the Ferrari history and especially with one of the most skilled driver of his generation, Micheal Schumacher, so also obviously it adds a bit to the story,” said executive assistant to the director of RM Sotheby’s sales, Vincent Luzuy. Sotheby’s was also presenting eight rare fancy blue diamonds valued in excess of $70 million. They will be offer at auction in Geneva, New York and Hong Kong, but the first one, a fancy vivid blue diamond estimated $11 to 15 million, will go under the hammer in the Swiss city on November 9. “The whole collection is about 70 million dollars. It’s going to be offer at Sotheby’s across Geneva, New York and Hong Kong in the next few months and the fancy vivid blue diamond we have here is estimated $11 to 15 million,” said jewellery specialist at Sotheby's Geneva, Marie-Cécile Cisamolo. The Gemological Institute of America (GIA) graded the top lot diamond a fancy vivid blue - the highest possible color grading according to Sotheby's, awarded to no more than 1% of blue diamonds submitted to the GIA. Blue diamonds at auction have had an admirable track record. In 2014 the Mellon Blue Diamond, renamed "The Zoe Diamond" at Sotheby's New York, sold for $32.6 million. A year later, in 2015, Sotheby's Geneva sold "The Blue Moon of Josephine," a 12.03 car at cushion-shaped internally flawless fancy vivid blue diamond for $48.5 million. It still holds the price-per-car at auction record for any diamond or gemstone. “There are extremely rare. Here we are very, very lucky to see quite a few of them and to go on the news here in about breaking world records. But it is extremely rare and to have a collection of 8 is super exciting and we are the first one to go in Geneva, so it’s double exciting,” Cisamolo said. The auction house will also offer several Car tier items, including the Rock crystal and diamond Mystery Clock that could fetch $1 million, onyx, emerald and diamond ‘Panthere’ and ‘Tiger’ bracelets or a gold watch from 1989, estimated between $300,000 and $600,000. “It’s like the legacy of the family lives on,” granddaughter of Jean-Jacques Car tier, Francesca Car tier Brickell told Reuters. “It’s always great to come and kind of hold the pieces and see then close up and just think, you know, what these pieces have seen, like this clock, which desk has it sat on in the last 60 years? You know, who has worn the watch? Who has worn these bracelets? I love the stories behind the jewels, so I love the older pieces,” she added. Sotheby’s will offer more than 1,000 lots during next week auctions, which combined, are estimated for more than $80 million, the most valuable sale ever staged in Geneva, the auction house said.