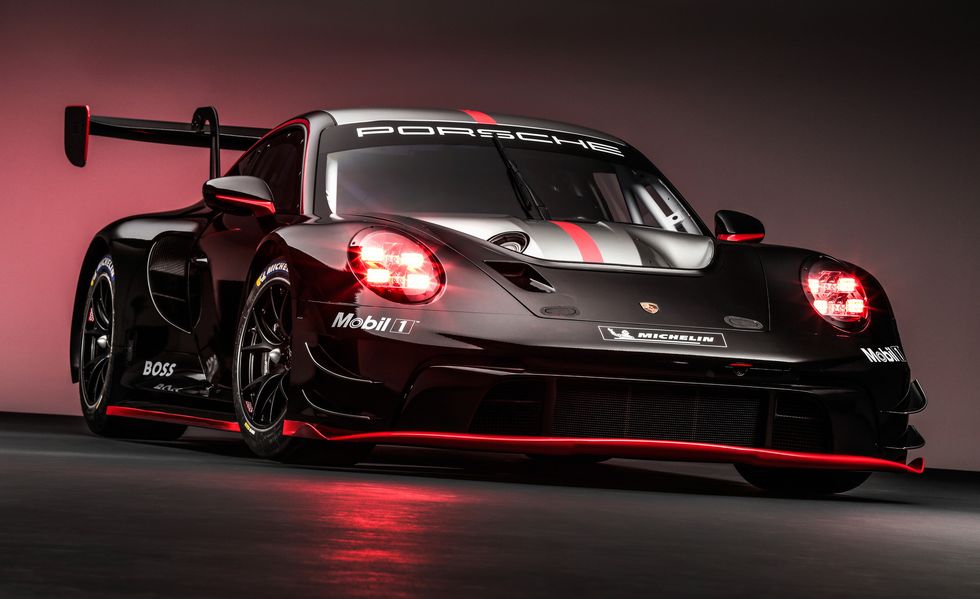 normally, developing a new race car is all about going faster. but in the two top endurance racing categories—the fia world endurance championship and the imsa sportscar championship—a system called "balance of performance" limits the cars' abilities in order to preserve parity and prevent one manufacturer from dominating. instead of focusing on outright speed, the new porsche 911 gt3 r was developed with durability and drivability in mind, to give sports car racers an easier time conquering grueling races like the 24 hours of daytona.

the 911 gt3 r is, of course, based on the current 992-generation 911 platform, but the wheelbase has been extended by 1.9 inches and the aluminum-steel composite frame is now cloaked almost entirely in carbon-fiber body panels. the naturally aspirated, water-cooled flat-six engine comes from the road car but is enlarged from 4.0 liters to 4.2 liters. peak output shoots up to 565 horsepower, but more crucially for porsche's goal of drivability, the torque and power bands are spread across more of the rev range.

the engine is still mounted in the rear but porsche leaned it forward by 5.5 degrees, allowing for more space for the rear diffuser, and the sequential six-speed gearbox has lifted from the gt3 cup car—which races in a slower, one-make porsche supercup series—and modified for use in the gt3 r.

the 911 gt3 r uses an unequal-length control arm suspension design at the front and a multi-link rear suspension, while the adjustable kw shock absorbers have five settings. porsche says the suspension has been designed to decrease degradation of the rear tires—allowing racers to drive longer stints while maintaining performance—as well as making it easier to institute setup changes. the extended wheelbase is also said to boost tire longevity and consistency of grip over longer periods on track.

aerodynamics play a big role on the gt3 r. the front packaging was rearranged to create an elevated underbody section, working alongside the flat under tray and rear diffuser to produce downforce. the massive rear wing also contributes to creating negative lift and adopts a swan-neck mount just like the roadgoing gt3, which improves aerodynamic efficiency by allowing for cleaner airflow under the wing.

inside, porsche shifted the driver's seat more toward the center of the vehicle, and the six-point harness was redesigned with new clasps to allow for quicker driver changes during pit stops. the new 10.3-inch screen comes from the gt3 cup car, while the multi-switch steering wheel comes from the 911 rsr that currently competes at le mans.

the gt3 r will hit the track in 2023 in imsa and will become eligible to compete in the world endurance championship—which includes the 24 hours of le mans—starting in 2024 when gt3 cars replace the current gte sports-car class that the 911 rsr races in. unsurprisingly, piloting porsche's 911 race car won't come cheap, with the gt3 r costing a cool $567,210.