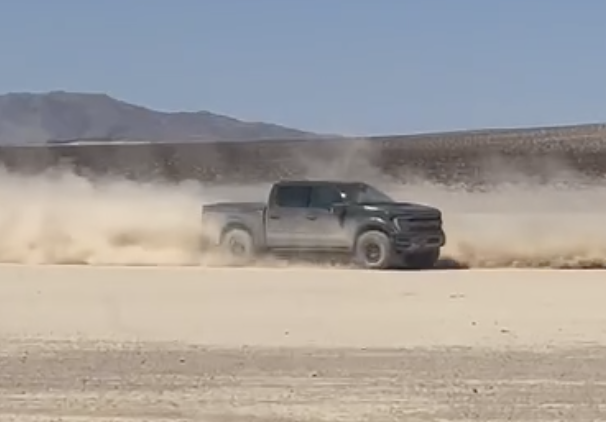 we’ve seen it in spy photos and on video, and now we’ve finally gotten a first-hand experience with the 2023 ford f-150 raptor r, ford’s answer to the ram 1500 trx. it may have only been a quick flyby through the southern california desert on the heels of a bronco raptor drive we’ll soon tell you more about, but we can confirm the rumors it will be powered by a supercharged v-8.

but exactly which v-8 will be stuffed under the hood, you might ask? the internet is powerful tool, and a window sticker recently dribbled onto the web appearing to show numerous powertrain details. we can further confirm via ford's dealer technician tool that the raptor r will be powered by the predator, a supercharged 5.2-liter v-8 also found in the mustang gt500, where it produces 760 horsepower. a 10-speed automatic transmission will handle gear exchanges. underneath, a 9.75-inch rear axle will feature an electronically controlled locking rear differential with a 4:10:1 ratio. like the v-6–powered raptor, we expect the front axle to have some locking properties.

predictably, electronically controlled fox livevalve dampers will control the motion of the massive 37-inch bf goodrich all-terrain ko2 tires. the interior will likely be similar to the standard raptor's, and the same 18-speaker b&o audio is shown on the window sticker. we expect the raptor r to have the f-150's larger 36.0-gallon extended range fuel tank (the standard raptor has a 26.0-gallon tank), as its fuel economy will surely take a hit compared with the v-6 version.

we expect to learn more about the raptor r later this summer.