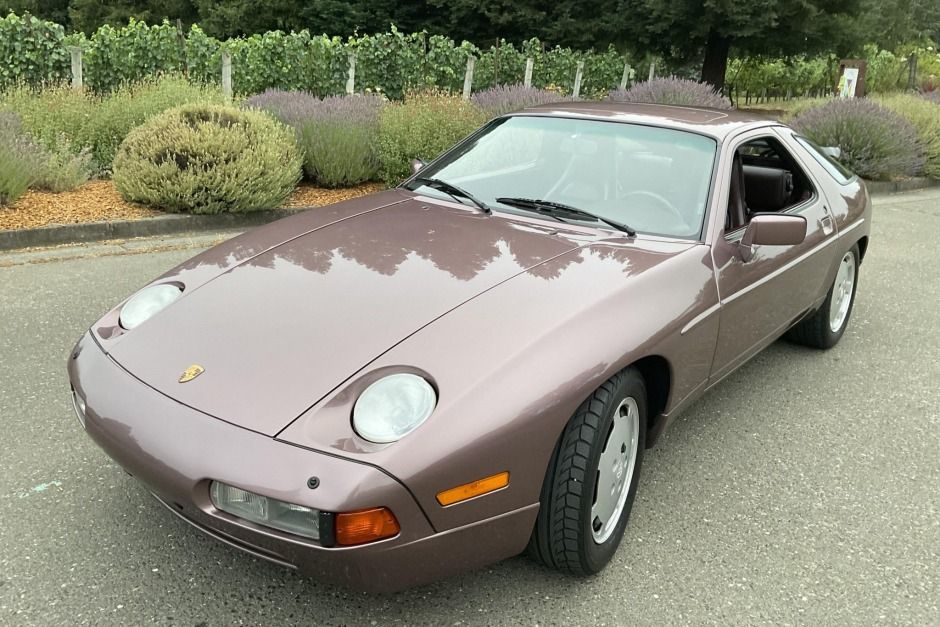 • this 1987 porsche 928s4 is currently up for sale on the bring a trailer website, reminding us of when the grand touring coupe broke the 300-hp barrier.

• with approximately 68,000 miles on its odometer and a recent timing belt replacement, this 928s4 ought to have no trouble reliably scratching your grand touring itch.

what better way is there to celebrate shark week than to ogle a clean example of porsche's affectionately named “land shark,” the 928? well, technically, this 1987 model year iteration of the german automaker's v-8 sports car bears the name 928s4. between now and tuesday, august 2, you can bid on it at bring a trailer—which, like car and driver, is part of hearst autos.

porsche added the s suffix to the front-engine model's name in 1983 to mark the switchover from a 219-hp 4.5-liter v-8 to a larger 234-hp 4.6-liter unit. an even larger, 288-hp 5.0-liter v-8 replaced the 4.6-liter for 1985, marking the third major powertrain update to the model, which still bore the 928s designation. two model years later, the 928 underwent its biggest change yet, which brought a myriad of exterior updates and a revised 5.0-liter engine with 316 horsepower. to denote this major update—the fourth for the 928—porsche affixed a “4” to the four-seat sports coupe's model designation; henceforth the 928s became the 928s4 for 1987.

besides being the most powerful iteration of the 928 (well, at least until the arrival of the 928gts in the early 1990s), the 928s4 was also the most aerodynamic. with a coefficient of drag of 0.34, the 928s4 significantly improved on the 0.42 cd of the original 1978 928. credit the likes of the car's updated bodywork and the addition of a massive rear wing, which replaced the small lip spoiler that spanned the rear hatch and quarter panels of prior 928s.

yes, the 928s4's design alterations lose some of the earlier 1978–1986 models' character, but the newer car's technical advantages arguably more than makeup for this loss. this is part of the reason why this '87 928s4 is so appealing to us. though we wish this cassis red metallic porsche were equipped with a five-speed manual and the original radio faceplate, we're willing to settle on a 928s4 with the available four-speed automatic gearbox (the car's kenwood faceplate, however, is something we'd ditch immediately in favor of an oe unit).

credit the 5.0-liter engine's 317 pound-feet of torque that's available at 3000 rpm. with so much low-end grunt, the 928s4's v-8 pairs surprisingly well with the slushbox. a three-pedal 928s4 may prove the more engaging tool on twisting tarmac, but we wager this grand tourer is an amenable tool for bombing down the interstate at barely legal speeds regardless of its gearbox.

this specific 928s4 ought to have no trouble engaging in such exploits, as its timing belt and various key cooling bits were serviced in april of last year. that's not the only documented work done to this approximately 68,000-mile porsche, as the seller includes the original window sticker and service records that date back to december 1987.

with bidding closing on august 2, there's plenty of time to put in a bid on this no-reserve land shark. we can't think of a better way to celebrate shark week.