SUV-Hating Tyre Extinguishers Group Is Out to Deflate Your Tires 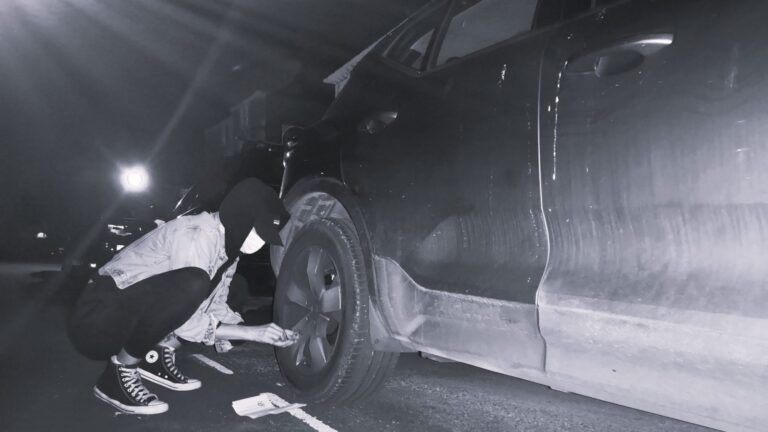 anti-suv protests are nothing new, and have existed pretty much ever since the large vehicles—too large, to some—became increasingly popular in the 1990s and early 2000s. those of us who were there remember the hummer salute, for example. calls for a ban on suvs have surfaced now and again over the years. in 2019, anti-suv activists protested at the frankfurt auto show, calling out the "suv-ization" of the industry. these protesters were glad to make their claims in public, where they were certain to be not only noticed but also apprehended.

now, a new wave of attacks on suvs is taking place way, way out of sight. or, at least, that's the idea. as first reported by the drive, a decentralized group called the tyre extinguishers (the spelling hints at the group's u.k. origins) is promoting the idea of deflating the tires of as many suvs as possible to help make it "impossible to own a huge polluting 4x4 in the world's urban areas." by deflating enough tires on these "massive, unnecessary vehicles," the group hopes to cause enough "inconvenience and expense for their owners" that people just stop driving big vehicles in crowded areas.

the group said in march that supporters had deflated the tires of around 100 suvs in cities across england, and that was just the start. the group now offers flyers in 10 languages and, earlier this month, celebrated the first actions in the u.s., claiming that dozens of suvs in "several major cities, including new york, chicago, and the bay area" had been targeted.

the group's reasoning and politics are abundantly clear. large vehicles like suvs are "a disaster for our health, our public safety and our climate," the group says on its website. "bigger and bigger cars are dominating our towns and cities, and all so a privileged few can flaunt their wealth. because governments and politicians have failed to protect us from this danger, we must protect ourselves."

before we go any further, let us point out that letting the air out of a stranger's tires has got to be at least a misdemeanor, right? in 2006, a member of the houston police department wrote in the houston chronicle that anyone letting air out of another person's tire "would be breaking the law whether you damaged the tire or not. simply letting the air out would be a violation of the law for the inconvenience caused the owner. you would also be responsible for any amount the person paid for towing or tire service." state laws against "tampering with a motor vehicle" are likely to be enforceable, but of course, first the person would have to be caught in the act of letting the air out of the tires.

the tyre extinguishers' website gives specific instructions on how to deflate an suv's tire in less than 10 seconds without doing any permanent damage, and it makes clear that the mission here isn't simply to make someone late for work. the group recommends targeting suvs in posh or middle-class areas and then leaving a leaflet on the windshield explaining why their suv now has a flat tire.

the tyre extinguishers also declare their limits, saying that cars clearly used by people with disabilities, commercial vehicles, minibuses and "normal-sized cars" should all be left alone. the group does not care about a vehicle's powertrain, either, proclaiming that hybrids and electric cars are fair game. "we cannot electrify our way out of the climate crisis—there are not enough rare earth metals to replace everyone's car and the mining of these metals causes suffering," they write.