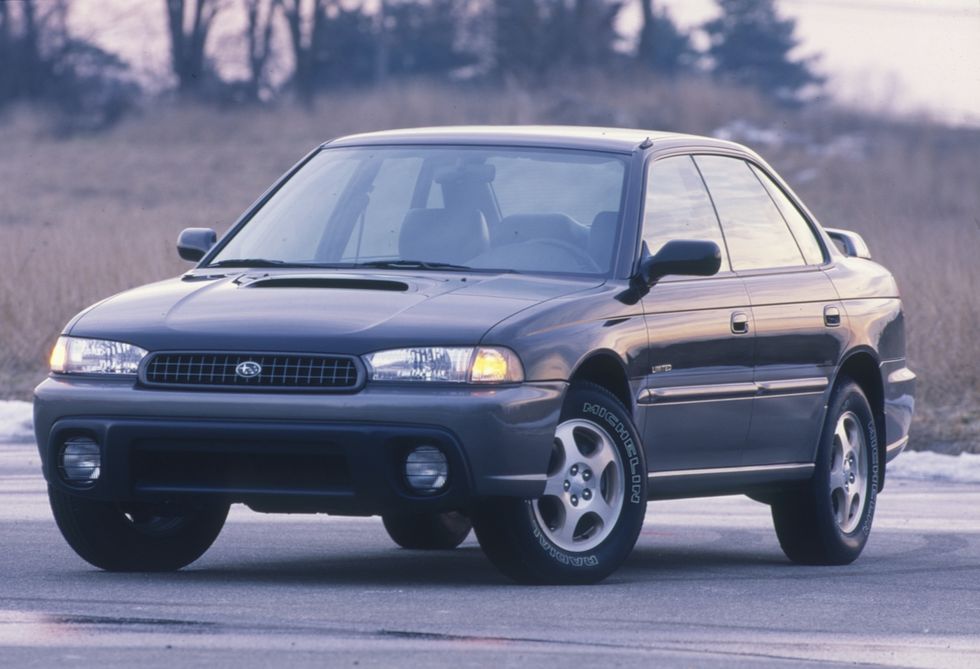 aha! we knew it. the amc eagle was ahead of its time. precisely 19 years ahead, it seems. the eagle line of four-wheel-drive coupes, sedans, and wagons, which we praised loudly for their peerless blend of on- and off-road ride and handling, preceded the sport-ute boom by roughly a decade.

today, almost every automaker is either comfortably seated on the suv bandwagon or ready for immediate boarding. many are exploring new niches with vehicles like the high-lux lincoln navigator, the butch mazda mpv all-­sport minivan, the jacked-up subaru outback wagon, the jeep jeepster off-road coupe concept, and the difficult-to-cate­gorize suzuki x-90.

now subaru has retraced amc's steps into the sport-utility-sedan subsegment with its new legacy sport utility sedan. the sus is a loaded 2.5-liter legacy gt sporting the crocodile dundee line of out­back outerwear. the ensemble includes a hood scoop, a decklid spoiler, two-tone paint with a stone-guard coating, and bush­whacking bumpers adorned with paris-­dakar fog lights up front and a sewer-pipe exhaust in back. big 15-inch aluminum wheels are shod with high-profile 205/70-series michelin xw4 tires. those tires and a slightly raised suspension give the sus 7.3 inches of ground clearance to go along with the off-roader looks (shallow approach and departure angles still restrict subarus to light trail running, however). and, of course, the legacy sport utility sedan, like all subarus, features full-time four-wheel drive.

outdoorsy touches adorn the interior, too, like a weather-band radio; split, folding rear seatbacks to accommodate skis and other gear; and heating for the front seats, the outside mirrors, the backlight, and the windshield area where the wipers park. the base legacy sus starts at $23,890. we opted for the limited model, which comes with leather, a glass sunroof, a cd player, and other niceties for $26,090.

right there, many of you will say, "whoa, for that money i could get an audi a4 1.8t quattro!" in fact, you could get one (with fewer features), and unlike the subaru, it would be available with a manual transmission. it would even sprint to 60 mph and through the quarter-mile 0.6 second more quickly than the sus's 9.0- and 16.9-second times.

but the fun to be had at the helm of the subaru is of a different sort. you ride high in the saddle, commanding a view down through the windshields of cars out front. pavement pocks and gravel washboards that would cause the sports-sedan driver to cringe are taken smoothly in stride by the sus's tall tire sidewalls and long-travel suspension. driving to work, we found ourselves seeking out the less-traveled gravel routes. on a few occasions we even flew our subie over some big humps and were impressed by how softly and silently the suspension behaved on takeoff and landing. the audi a4 is not ideally suited for such duty.

this acclimation to rally-style running doesn't compromise the sus 's on-road behavior much. it clings to dry tarmac with 0.79 g of grip—0.01 g better than the audi—and it stops on a 183-foot-long dime from 70 mph (the a4 stops seven feet shorter). the body leans more in turns, and the tires seem to take their set after the sus­pension has settled in a fast sweeper, but this sport utility sedan—like its outback and forester siblings—is more fun to drive than any other variation on the sport-utility theme. funny, that sounds a lot like the praise we heaped on the original eagle.

the sus, like the eagle sedan, looks less comfortable in off-road garb than its wagon sibling does. perhaps for this reason, subaru only expects to sell 3600 suss per year (that's about how many sedans eagle sold annually in the early '80s), and most takers are expected to live where it snows (as did most eagle pilots). all legacy sport utility sedans will be built in lafayette, indiana—179 miles southeast of the eagle's kenosha, wis­consin, birthplace.

with so many obviously striking sim­ilarities to the amc eagle, we're put off by subaru's unjust claim that the legacy sus is "the world's first sport-utility sedan." we'd be indignant, but we're still smiling from our rip-roarin', rut-runnin' ride in to work this morning.