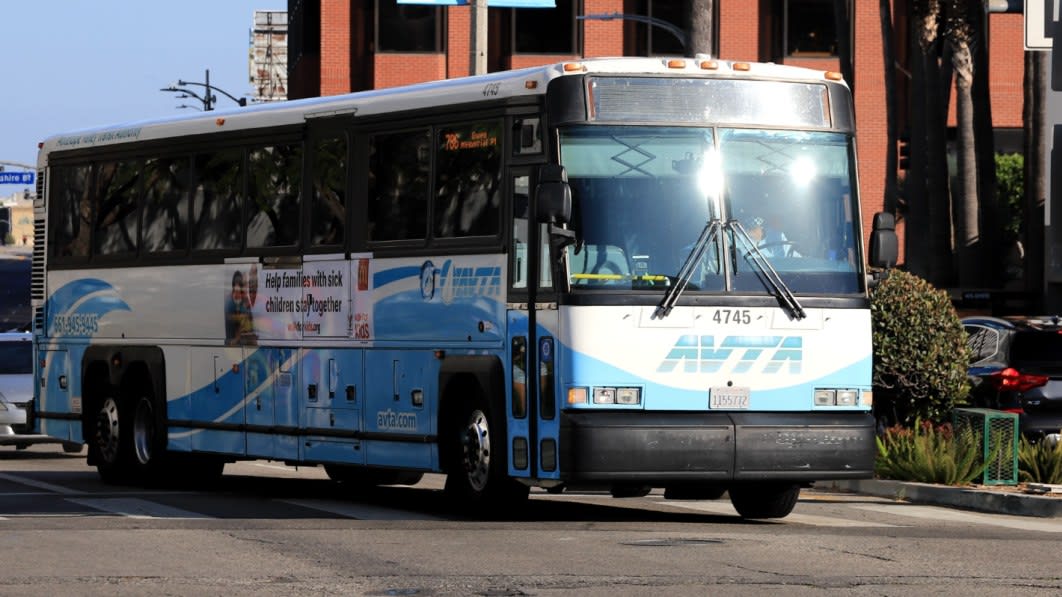 by adrian martinez, senior attorney on earthjustice’s right to zero campaign. twitter: @lasmogguy. if the first thing that comes to mind when you hear the phrase “electric vehicle” is some wealthy guy driving a gleaming new tesla, think again. think large buses. think not-so-wealthy. think antelope valley. the antelope valley is a middle- and working-class, semi-rural area northeast of los angeles, where the antelope valley transit authority recently became the first in the u.s. to replace all its dirty diesel and combustion buses with electric transit vehicles. a deeper look into antelope valley’s success can unravel our notions about electric vehicles and who’s driving them. antelope valley isn’t a wealthy enclave — its per-capita income is about 20% less than the state average, and its median home value is substantially lower than california’s. its biggest town, lancaster, is split nearly evenly between republicans and democrats, and parts of the district are represented by house minority leader kevin mccarthy. commonly held stereotypes about california just don’t apply here. but in february 2016, avta became the first u.s. transit agency to commit to converting to an all-electric fleet. it’s since replaced its smog-belching diesel vehicles with a total of 87 electric buses, vans and commuter coaches — an outcome championed by the right to zero team at the nonprofit earthjustice, where i'm a senior environmental attorney. antelope valley innovated to get there — for example, by charging vehicles with cutting-edge wireless inductive technology. and the agency’s electrification program scored a series of firsts, including the first all-electric 60-foot articulated bus in regular paid passenger service, as well as the nation’s first electric commuter coaches. antelope valley has also started building a solar field linked to battery storage that will allow it to charge its electric fleet entirely with solar energy.  because electricity is cheaper than diesel fuel and electric vehicles cost less to maintain than their diesel or gas counterparts, antelope valley is already saving money. the lower operating costs — saving antelope valley $2.4 million and counting — have enabled the transit authority to build out its dial-a-ride service, giving more help to residents in rural sections of the valley who don’t own a car and previously hadn’t been well served by regular transit. those savings will only grow in the face of volatile fuel prices for transit agencies still relying on combustion vehicles. and in an era when americans worry about all the products (not to mention the oil and gas) imported from overseas, antelope valley’s buses are made locally by union workers. the company that builds them, byd north america, has a factory in lancaster with more than 400 workers, and it’s made key commitments to its neighbors through a legally enforceable community benefits agreement. these include an 18-month industrial manufacturing technician apprenticeship program that was jointly launched by byd, the union representing its workers, and the local community college in 2019. the company has also set a goal to draw 40% of its workforce from populations that face significant barriers to employment. and let’s not forget the environmental benefits. so far, antelope valley’s all-electric fleet has driven a combined 7 million miles. the transit authority’s conversion to electric has saved the agency from burning 1.75 million gallons of diesel fuel, and from spewing 130,900 pounds of lung-damaging particulates and 41.6 million pounds of carbon dioxide, according to its calculations. while early electric transit buses faced stumbling blocks in fleet operations, they’ve made strides in california in recent years. that’s in part because transit agencies have been building their expertise under california’s innovative clean transit rule, a groundbreaking regulation i advocated for in 2018 that lays out a roadmap to get to 100% zero-emissions public transit buses. that rule has quickly become a striking example of regulatory success: california transit agencies have 1,244 battery-electric buses, representing nearly 40% of all battery-electric buses in the united states. and while the us still lags in e-bus adoption internationally, california’s sure-footed commitment to zero-emissions transportation is a bright spot in north america. five california transit agencies are planning to follow antelope valley’s example and fully transition to zero-emissions bus fleets by 2030 — the los angeles department of transportation, los angeles county metropolitan transportation authority, foothill transit, long beach transit, and santa monica’s big blue bus. every state in the nation could adopt a regulation like this one to spur the type of leadership california is exhibiting. we know that to protect our climate we need to move on from burning gasoline, diesel and methane, but we’ve been hampered by an overly narrow view of electric vehicles. the real stars of the ev world just might be the humble electric transit bus, garbage truck or school bus. when the trump administration worked to roll back vehicle emission standards at the federal level, local communities and states rolled up their sleeves to incubate clean new ways to move people and goods where they need to go. antelope valley’s success should inspire large public transit agencies around the country to plan for an electric future and take advantage of large pots of funding in biden’s infrastructure bill. california wisely committed via regulation to buying only zero-emission buses by 2029, sparking the trend towards electrified public transit. but it’s a working-class, semi-rural community that has lit the path for the rest of us. the electric revolution is happening all around us — quieter and cheaper than you may have thought.