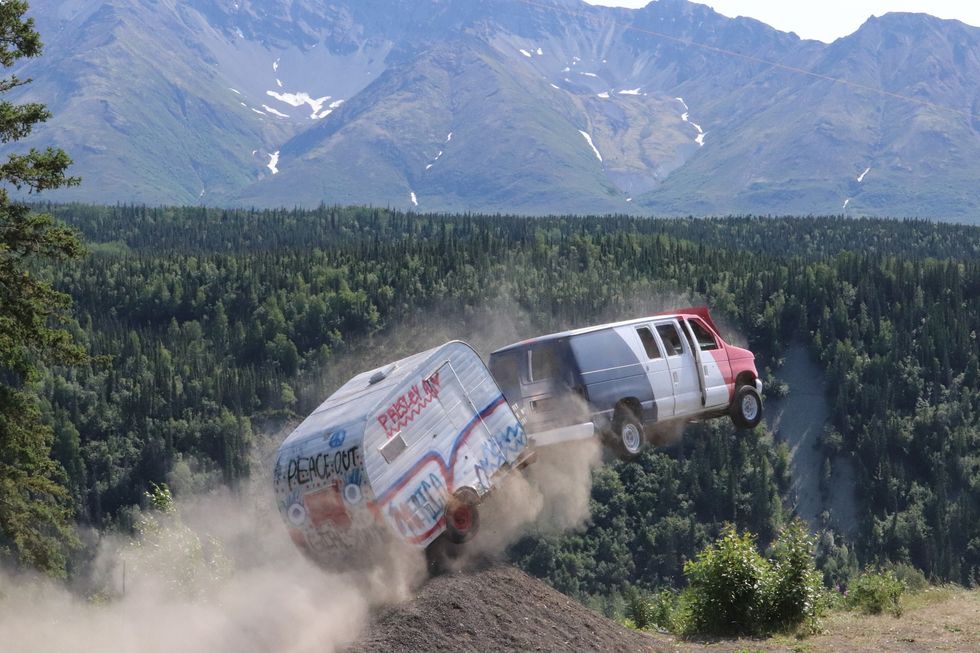 this fourth of july tradition is a little evel knievel, a little demolition derby, and 100 percent awesome. where other towns gather to watch fireworks and chow down on hot dogs to celebrate the signing of the declaration of independence, alaskans in and around anchorage travel to glacier view river retreat in glacier view, alaska, to watch cars get launched off a 300-foot cliff. don't believe me? see for yourself:

no alaskans were harmed in the making of this video. in fact, the system for launching the cars is completely hands-off. car and driver spoke with arnie hrncir, one of the founders of glacier view river retreat and the organizer of the event, and he explained that they have two launch tracks: one with a railroad track that attaches to the vehicles' steering arm, and another one where they tie the steering wheel straight with ratchet straps and open the throttle.

as if that wasn't cool enough, the cars are painted with some wacky paint jobs. many of the 13 vehicles that got launched off the cliff this year featured red, white, and blue alongside patriotic slogans, but others were personalized to represent the community. above are pictures of a few of the cars courtesy of ice monkey garage, a local customization shop.

some even came all the way from reno, nevada, as part of the caravan of carnage. this one below was painted by residents of maple springs of palmer, a nursing and rehabilitation community outside anchorage.

the glacier view fourth of july car launch began in 2005, according to hrncir, and it started in a way that can only happen in alaska. in 2003, his wife hit a moose in their volvo, and eventually he got tired of working on the car. what to do with a totaled volvo? put a rock in the trunk and run it off a cliff. obviously.

now, though, it has evolved over the years to become an independence day event dedicated to what hrncir calls an "f day."

he also highlighted the importance of honoring veterans to the event, noting that they acknowledge veterans' contributions to this country "over and over" throughout the day.

after the birthday party is over, the cars are loaded up onto 18-wheelers and taken to be recycled, because the second-best way to celebrate america the beautiful—after launching cars, of course—is to honor her natural beauty by keeping her clean.